This dataset contains the forcing data for Phase 2 of the North American Land Data Assimilation System (NLDAS-2). The data are in 1/8th-degree grid spacing and range from 01 Jan 1979 to present. The temporal resolution is hourly. The file format is WMO GRIB-1.

The NLDAS-2 forcing datasets (hourly, monthly average, and monthly climatology) are available from the "Get the Data" link on the right or on the top menu.

The spatial domain, spatial resolution, computational grid, terrain height, and land mask of NLDAS-2 are identical to that in NLDAS-1, which is described in Section 2.1 of Mitchell et al. (2004).

Appendix A provides web addresses to NCEP online GRIB-1 documentation, source code, and parameter tables. In particular, readers of this document should read the discussion in Appendix A of GRIB-1 Parameter Tables.

The NLDAS-2 land-surface forcing files and land model output files use Parameter Table 130, which is oriented toward land/hydrology modeling.

The non-precipitation land-surface forcing fields for NLDAS-2 are derived from the analysis fields of the NCEP North American Regional Reanalysis (NARR).  NARR consists of: 1) a retrospective dataset starting from Jan 1979, and 2) a daily update execution at NCEP. The daily update provides a real-time NARR continuation known as the Regional Climate Data Assimilation System, or R-CDAS.

NARR analysis fields are 32-km spatial resolution and 3-hourly temporal frequency. Those NARR fields that are utilized to generate NLDAS-2 forcing fields are spatially interpolated to the finer resolution of the NLDAS 1/8th-degree grid and then temporally disaggregated to the NLDAS-2 hourly frequency. Additionally, the fields of surface pressure, surface downward longwave radiation, near-surface air temperature and near-surface specific humidity are adjusted vertically to account for the vertical difference between the NARR and NLDAS fields of terrain height. This vertical adjustment applies the traditional vertical lapse rate of 6.5 K/km for air temperature. The details of the spatial interpolation, temporal disaggregation, and vertical adjustment are those employed in NLDAS-1, as presented by Cosgrove et al. (2003).

The hourly land-surface forcing fields for NLDAS-2 are grouped into two GRIB files, "File A" and "File B". This is a change from NLDAS-1, which had only one hourly forcing file.

File A is the primary (default) forcing file. It will contain the following eleven fields (units are given in parentheses):

** indicates a field to which the aforementioned vertical adjustment is applied.

The first eight fields above are the traditional land-surface forcing fields, such as in PILPS (Project for Intercomparison of Land-Surface Process Schemes) and GSWP (Global Soil Wetness Project).

One fundamental physical process represented in land modeling is the surface aerodynamic conductance, which represents the intensity of the near-surface vertical turbulence that transports heat and moisture between the land-surface and the overlying atmosphere.

The 2-meter temperature and specific humidity and 10-meter wind fields applied in continental-scale land-surface modeling studies are typically products of the data assimilation/analysis systems of mainstream NWP centers. The 2-meter and 10-meter levels in such analysis/assimilation systems are rarely explicit levels in the background assimilating NWP model of the given NWP center. Hence NWP centers diagnose these 2-meter and 10-meter fields from the lowest prognostic level of the assimilating model. This diagnostic derivation of 2-meter temperature and humidity fields and 10-meter wind fields is done on the basis of: A) those same fields at the model's lowest prognostic level, which is usually well above the 10-meter level (e.g., 20-200 meters above), and B) the given model's method for modeling the aerodynamic conductance of the "surface layer", also known as the "constant flux layer" -- i.e., applying the given model's particular approach to such physical entities as the surface roughness length for momentum, the surface roughness length for heat, surface layer stability functions (e.g., similarity profile functions) and surface layer parameters (e.g., mixing length).

NLDAS-2 is therefore providing a second forcing file, File B, in which the surface temperature, humidity, and wind fields are represented not at 2 meters and 10 meters above the height of the NLDAS terrain, but rather at the same height above the NLDAS terrain as the height above the NARR terrain of the lowest prognostic level of the NARR assimilation system (namely, the same height above the model terrain as the lowest prognostic level of the mesoscale Eta model, which is the assimilating model in NARR).  We shall denote the latter height as "H", and this height H varies spatially in the horizontal. The motivation for this approach is to allow land models in NLDAS-2 to calculate their aerodynamic conductance from surface forcing fields that are significantly more independent (albeit not fully independent) of the aerodynamic conductance approach applied in the assimilation/analysis system from which the surface forcing fields were derived.

Specifically then, forcing File B of NLDAS-2 will contain the following ten fields:

Fields 7-10 above are provided for additional reasons, as follows. Fields 7 and 8 are provided to permit land modeling sensitivity tests in which the solar radiation and precipitation fields of File A are replaced by their less accurate counterparts taken directly from NARR. Fields 8 and 9 are the NARR fields used to derive the field of "fraction of convective precipitation" in File A. Field 10 is the aerodynamic conductance obtained from NARR, to allow comparison with the aerodynamic conductance computed independently by each land model in NLDAS-2.

The NCEP online User's Manual for the GRIB-1 data format is available here.

The NCEP web site providing Fortran-90 source code and documentation of code, as well as the NCEP GRIB-1 User's Guide, is here.

For a given physical variable, the GRIB data convention assigns the following:

The unique GRIB parameter IDs for given physical variables are provided in tables known as GRIB parameter tables. The GRIB-1 Parameter Tables formally recognized at NCEP are available online here.

At of Dec 2007, NCEP formally recognized five GRIB-1 Parameter Tables, namely: Table 2, Table 128, Table 129, Table 130, and Table 140. Each of these tables define up to a maximum of 255 physical variables and their corresponding unique Parameter IDs. Additionally, each table has a Part 1 and a Part 2. Part 1 is identical across all GRIB-1 Tables and provides a WMO mandated list of 128 physical parameters and their WMO-mandated unique Parameter IDs. Part 2 is defined locally by the originating center or agency and the list of physical parameters in Part 2 is often aligned with a given physical specialty. At NCEP for example, Part 2 of Table 128 is oriented somewhat toward ocean modeling and ocean physics, and Part 2 of Table 129 is oriented somewhat toward cloud microphysics.

The parameter IDs for Part 2 of Table 130 are available online here.

The parameter IDs for Part 1 of Table 130 are identical to those of Table 2, online here.

The parameter IDs GRIB tables specific to the NLDAS-2 data as stored on the NASA Hydrology DISC can be found here.

Appendix B: Bias Correction of Downward Shortwave Radiation for NLDAS-2

Over CONUS, CPC PRISM-adjusted 1/8th-degree daily gauge analyses serve as the backbone of the NLDAS-2 hourly precipitation forcing. In Mexico, where this dataset is unavailable, CPC's 1-degree (1/4th-degree after 2001) North American daily gauge product is used instead. In NLDAS-2, these gauge-only daily precipitation analyses are first processed to fill in any missing values, and then are temporally disaggregated into hourly fields. This is accomplished by deriving hourly disaggregation weights from NWS real-time, 4-km Stage II and 8-km CMORPH hourly precipitation analyses. Stage II data is available from 1996 to the present, while CMORPH data is available from 2002 to the present. The Stage II product consists of WSR-88D Doppler radar-based precipitation estimates that have been bias-corrected using hourly multi-agency gauge data (Fulton et al. 1998), and mosaicked into a national product over the contiguous United States (CONUS) by NCEP/EMC (Baldwin and Mitchell, 1997). This CONUS mosaic of the Stage II product is interpolated to 1/8th-degree and any gaps in radar coverage (which total on average 13% of the area of the CONUS and are due to lack of radar coverage or equipment maintenance) are filled in with nearest neighbor Stage II data from within a 2-degree radius. If no Stage II data are available, then CMORPH data are used instead. CMORPH data is also used over the Mexican portion of the NLDAS domain which is outside of the Stage II's region of coverage. When CMORPH data is unavailable, such as before 2002, the 2 X 2.5 degree CPC Hourly Precipitation Dataset (HPD) is used. If HPD is also unavailable, NARR data is used instead. Details of the precipitation gauges used in the CPC analyses can be found here, which also links to a map of the gauges that ever provided data for these analyses, with about half of these gauges still active in the real-time data production.

Starting on 01 January 2012, NLDAS-2 transitioned from the unified CPC precipitation product to an operational CPC precipitation product, as the previous product was no longer being generated. The primary difference between the products is that the interpolation algorithm has changed (as the input precipitation gauge information is the same). For the unified CPC product from 1979 to 2011, the Inverse Distance method was used, with missing values replaced using a precipitation climatology. For the operational CPC product from 2012 to present, the Optimal Interpolation method (OI) is used, with missing values replaced using the value from the nearest station. This difference in the interpolation method has shown some differences in the behavior of precipitation, especially right on the U.S.-side of the border with Mexico, in western mountainous regions, and along coastlines.

The different precipitation products (by year and location) used for generation of hourly NLDAS-2 precipitation is summarized in the table below. Unfortunately, due to data availability and the quasi-operational nature of NLDAS, complete continuity of the data over all times/locations is not possible. Additionally, the number and location of the precipitation gauge observations stations has varied over the NLDAS-2 record. For details, please see Figure 2 in Mo et al. 2012 and this presentation by Chen and Xie. For known issues with the NLDAS-2 precipitation, please see this FAQ and answer.

*Table below scrolls to right 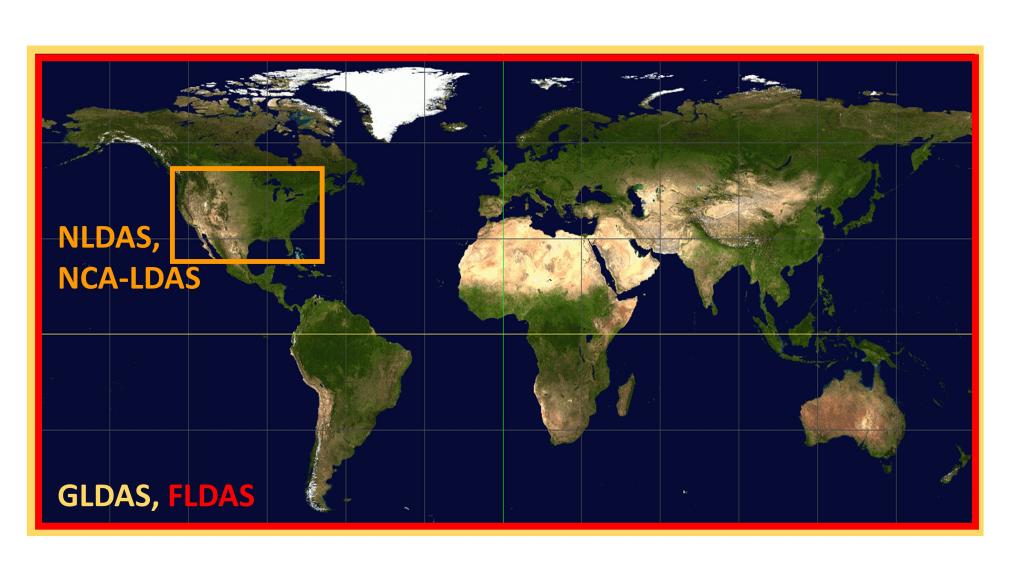